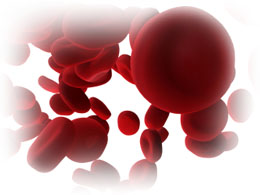 To understand Thalassaemia, you have to first get some ideas about what regular blood and anaemia is:

Red blood cells contain haemoglobin, a red pigment, which is why our blood is red. It is very important because its function is to carry oxygen throughout the body.

Furthermore, haemoglobin also contains a lot of iron. When red blood cells are broken down, our iron is reused to form new haemoglobin. However, we still lose some iron naturally, but that is easily solved by including foods that have low iron in it.

Anaemia means that there is a reduced number of red blood cells, or a low level of haemoglobin, in the body. Out of all the different kinds of anaemia, Iron Deficiency Anaemia—which is due to insufficient iron in the diet—is the most common. Thalassaemia major is another type of anaemia that is caused by a lack of haemoglobin but it does not relate to the absorption of iron, since it is an inherited disorder.

Thalassaemia is one of the most common inherited genetic blood disorders in the world, which is mostly prevalent in Mediterranean countries, the Middle East, and in Asia.

Clinically, there are two main categories of Thalassaemia - the alpha (α) and beta (β), which is then broken down to three other classifications, which are then sorted according to the degree of anaemia: the Mild Form (Thal-minor), the Moderate Form, and the Severe Form (Thal-major). Since the amount of people who have Moderate form is relatively small, we will just go ahead and discuss the Mild Form and the Severe Form.

In normal blood, haemoglobin is built up by two types of globin chains: the alpha (α) and the beta (β). Normally, each individual has two sets of globin genes, one from the father and the other one from the mother. However, if one or more defective gene(s) were inherited from a parent, then there would be a reduction of either the α or the β globin chains resulting in the lowering of the haemoglobin level and Thalassaemia. The above situation determines whether a person would suffer from the α or the β form.

Thalassaemia minor means that a person inherited one defective gene, so he/she would be known as a Thalassaemia carrier. Most of the carriers have no symptoms and do not require any treatment; a few of them may be mildly anaemic. Since there are no major symptoms, the condition can only be detected through blood tests. Today, there are eight hundred seventy thousands people that are known to be Thal-carriers, meaning that 12.5% of our population is carriers.

Thalassaemia major is also known as, Cooley’s Anaemia or, Mediterranean Anaemia, which is a serious form of inherited childhood anaemia. Children with Thalassaemia major cannot produce enough haemoglobin on their own and for this reason, they have to sustain their lives by having regular blood transfusions and taking doctor prescribed drugs. Since Thalassaemia is an inherited disorder, it is not contagious. Moreover, Mild Thalassaemia will not worsen and become the Severe Form. For further information, please refer to the page about precautions and heredity of Thalassaemia.

Around the world, there are hundred of thousands of newborn babies that suffer from Thalassaemia every year. In Hong Kong, there are nearly three hundred fifty patients, that affect children, teenagers, and adults.